FORT MYERS, Florida — I was driving the other day when I heard in a talk radio show the same old song: "The increase of crime is due to the increase of immigration".

Of course, this is one of the favorite arguments in anti-immigration speeches by groups like The Minutemen and Americans Standing Tall.

Was it worth it to call the radio station to argue? Probably not. Any doctor may advise otherwise.

To rebut false arguments, there is nothing better than cold numbers.


For starters, crime has not increased in the United States, on the contrary: It has been constantly decreasing for years.

According to statistics by the Department of Justice —available in the internet —in 2005, violent crime (defined by the FBI as murder, forcible rape, robbery and aggravated assault), totaled 1,823,400.

In 2006, the number had increased 3.7 percent, according to preliminary numbers.

And while crime is down, the Hispanic population is up: In 2005, Hispanics were 14.3 percent of the total population in Lee County, up from 9.5 percent in 2000, according to the Census.


Believe it or not, immigration is down nationwide. According to the Pew Hispanic Center, in 2004, 1.1 million immigrants —legal or not— entered the country, 24 percent less than in 2000.

Another myth is that cities with the most immigrants are more violent. Miami is the immigration capital of the United States —60 percent of its population was born overseas in 2000, according to the Census.

But they are not the most dangerous.

Detroit was second, with 21,240 crimes and 39.3 homicides. The rest of the "Top Ten" were, in order: St. Louis, Washington, Newark, Kansas City, Philadelphia, Cincinnati, Cleveland and Oakland.

None of them with high concentration of immigrants.

Among "Hispanic" cities, Miami ranked at a low 24th place, according to the FBI. Los Angeles was 21st.

San Antonio and New York, two of the cities with the most immigrants, ranked at a bottom low 48th and 49th, respectively.


And despite what the Minutemen and other vigilante militias say, border cities are not "ravaged" my violence. San Diego ranked 59th and El Paso 67th in 2005.

There does seem to exist a direct relation between immigration and crime, but it's exactly the opposite: More immigrants equal to less violent crime.


These are the findings of two recent studies, made independently by experts from Harvard University and the Immigration Policy Center, in Washington, D.C.

Professor Robert Sampson, chairman of the Department of Sociology and the Henry Ford II Professor of the Social Sciences at Harvard , surveyed more than 3,000 people of different races in 180 neighborhoods in Chicago, from 1993 through 2003, along with Census and Police data, and found that immigrants are 45 percent less prone to violent crimes than American-born Hispanics.

Sampson published his findings in an Op-Ed piece in the New York Times in 2006, where he argued that in neighborhoods with high concentration of immigrants a significant reduction in violent crime was detected.

Sampson theorized that foreigners —mainly Hispanics— tend to be more conservative, and having more families with kids.

“They may have a certain motivation to work and not get arrested”, he explained during an interview in the Sept.-Oct. 2006 issue of Harvard Magazine.

"Many of these immigrants are likely to be in the country illegally, which may give them extra incentive to keep a clean record and not commit crimes, in order to avoid deportation”, he added. “It’s just a whopping effect”.

So those, those who plan to attend the next anti-immigration rally, perhaps should renew their speeches. And look a little bit harder to the numbers of the real world.

Or, maybe they could invent a whole different kind of logic for themselves. One that suits their own particular vision of the world they invented. 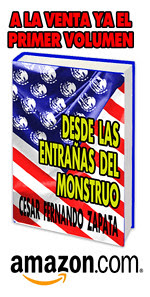